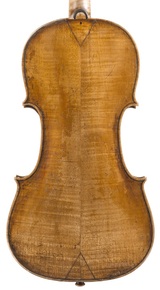 Jacob Rayman (1596 - 1658) was the first known violin maker in England. He was born some time before 1596 in the Bavarian town of Fussen, a thriving center for instrument making at the time. Rayman likely learned violin making in Fussen and left the town around 1625 to escape the area's already crowded population of luthiers.

Some historians question whether other British violin makers predated Rayman, and they point out that the country already was home to several successful viola de gamba makers. Regardless, the oldest known British violin bears Rayman's 1641 label.

Rayman worked in London, which would become the epicenter for English violin making. While many makers would open shops on London Bridge, Rayman worked from a neighborhood populated mostly by immigrants from Germany and the Netherlands. Rayman's son also built instruments, but none of his violins have been discovered.

The bulk of Rayman's career was spent in a time of upheaval in London. A civil war and a Puritan regime chilled public performances and theater. But Rayman thrived through this period, presumably by making instruments for amateur players or professionals who were forced to play music mostly at home.